A bit of wet work

A couple of weeks ago Mexican Dave dropped into the conversation "I quite fancy doing some historical Naval gaming." and as usual I jumped in with both feet. 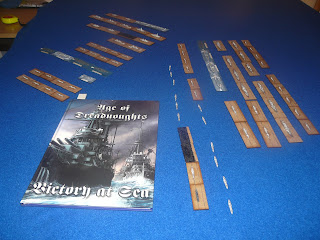 The historical reference was probably due to all the Dystopian Wars we were playing on the run up to Xmas, but here's this months buy ins.

So all in all around the £80 mark for pretty much everything I need to play WW1 naval games, its not too bad at all. I think I overdid it on the Britsh destroyers though, I ordered 30 of the little buggers, so the last dozen will probably go back into the bag and go into the "when I've nothing else to paint drawer".
Posted by GordonY at 07:16 2 comments:

Nostalgia's not what it used to be

Inspired by last months visit to my gaming roots (see my earlier post on Battletech), and inspired by the fact that Sue Barker has released this as a free PDF from the WRG site. 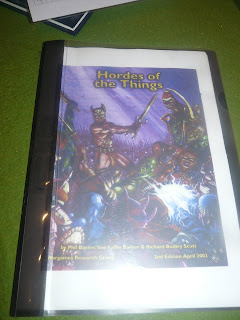 I just had to stumble across the 15mm.co.uk website and notice that they had some spiffing deals on HoTT armies, the net result of which is :

Yeah, yeah, yeah I know the Orcy chariot isnt painted yet (see my last post on the perils of puppies) but its getting there. :)

Not much painting getting done

well, not much of anything really, and here's the reason why 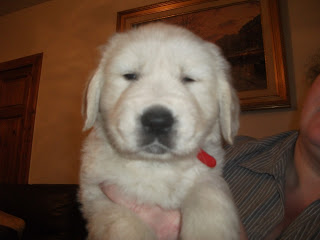 and here's his nibbs enjoying quality time with his big sister 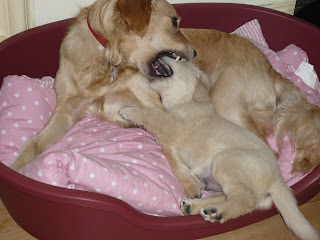 Yeah I know, looks terrifying, but apparently its the way retrievers play, they seem to enjoy it, but a seven week old pup is a whole shedload of work.

Yup a whole month without a post, I must have been doing something more interesting than wittering on about my hobby. For some strange reason I found myself thinking that its been 25 years or more that I've been wasting my time on wargaming, and bam!!! There on e-bay was the 25th Anniversary edition of Battletech, I've always been an impulse buyer and since it was at a knockdown price of £35 instead of the reccomended £50 I bought it. Well, to say the least the 24 Mechs that it comes with are bloody awful, better than the carboard standups that I remember when I first bought it way back when, but only marginally. Strike one against them is the flash on them if everywhere, strike two is that theyre made of some sort of polythene so getting rid of the flash is a nightmare, strike three is that there are deep holes in them from what I presume to be ejector pins and finally the hex bases theyre cast on dont match the hexes on the map boards. So all in all a whole load of work to be done on the mechs.

The rest of the box contents however have improved a lot in the last 25 years, the maps to start with are a joy compared to the flimsy paper sheets, now on really heavy duty cardstock, the rules are better laid out and nicely illustrated. The 2 "premium" mechs in the package are a delight as well, now this is how the other 24 should have been, to be honest I'd have rather have had even just 4 of this quality than the 24 pieces of garbage, but hey-ho, they'll still end up with a quick paint job and being used.
Posted by GordonY at 05:27 3 comments:

Ooops, how did that happen?

Well one minute I'm sitting wondering what to paint next and then this.......... 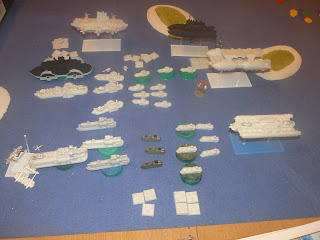 my Dystopian Wars painting backlog. Yeah, yeah, but I can at least claim to be only partly responsible, Xmas from the missus came early. The GW Space Marine is in there for scale, and there are another 8 ships sitting in my shopping cart waiting for payday, I think that lot might take me a little longer than January to paint.

the next of the big 'uns

This one arrived today, a lot earlier than I'd thought it would 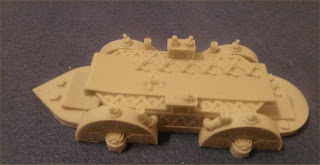 I must say that this one isnt big, its a freakin MONSTER, just over 6 inches from stem to stern, but happily it should prove the easiest build of all the carriers so far as it comes in only 2 pieces, main hull and top deck. When you compare that with the British Sky Fortress that came in 19 pieces thats pretty damn good. Oh yeah for anyone not into Dystopian its an American Aircraft Carrier.

These additions to the French and British fleets arrived today, 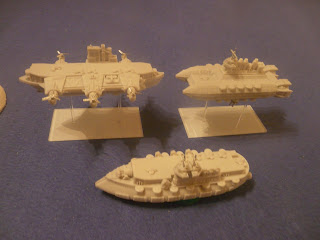 and these buggers are BIG, so big that getting them painted is quite daunting, well for me anyway. But I suppose that its going to have to be done and done quickly as there are another 3 on their way, this time American and Japanese. Why American and Japanese, well because I happened to come across an e-mail from Spartan to my missus confirming the order of those two starter fleets, that'll teach her to delete e-mails that she doesnt want me to see.